There were some more surprises at the Fair.

I expected this image to do well – only because others have told me how much they liked it.  In fact, if any image had a chance at Best of Show, I figured it would be this one.

Funny thing about what I saw and did not see.  I wanted to capture the angular image of the bridge and the river.  I saw that this spot would be an ideal candidate to create an HDR image.  Wind was mostly calm (hard to stack and blend images of plants when the leaves are moving).  It was not until I shared it with our SmugMug Photography club and it was projected on the screen that I really saw the circles in the middle of the bridge and reflection.  Guess I was too focused on technique and not fully enjoying a special view.  So it was at a later point that I really felt this image was special.

The competitive spirit in me was actually disappointed at the place given but I think I know why.  This is a collage of many smaller images and I suspect the judges were being kind by not disqualifying it for being in a wrong category.  It probably belonged in the Digitally Enhanced category.

The story and dilemma behind this image:  Less than two weeks before the deadline to submit the entry forms to the TC Fair, a group of photographers from the Valley Photography Group (club) gathered in the early morning to photograph the hummingbird migration in the back yard of a local ranch home. Of the gazillion photos I took that morning, I was pleased to nail a few sharp ones.  So I turned in the registration form with a Humming Bird photo listed and figured I would select one to print.  After  turning in the form, I realized that none of the individual images could be printed large enough by itself to make a quality minimum sized image for the competition.  Since I had a number of good images, I decided to create a collage to showcase more of them.  A few hours of Photoshop blending work created this final image.  The full gallery of Humming Bird photos here: Humming Birds.   Blog about it here: Poetry in Motion 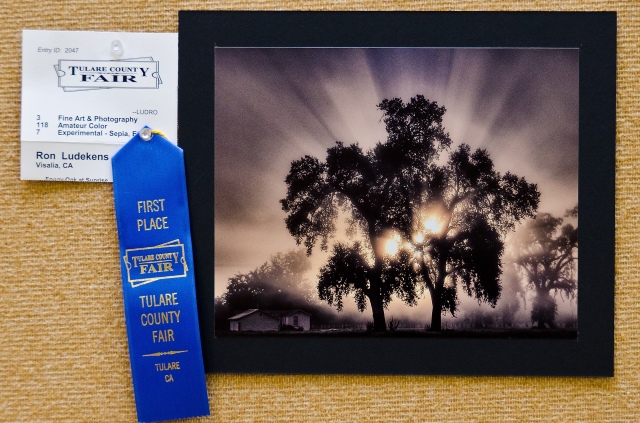 I had three Valley Oak (Quercus lobata) photos in this competition.  For 20 years I have driven by some of the most stately, beautiful oaks in the Valley while doing my short seven minute commute to work.  In more recent years, the camera is with me every day so when God decides to do something spectacular with the weather, I take the click.

We all hate the Tule fog.  But sometimes it creates nice opportunities for interesting images and this particular morning the sun beams were placed just right.  My U-Turn was probably not legal, but the sun moves surprisingly fast when rushing find a place to park and get a camera and tripod set up.  There wasn’t much color in this photo to start with so I took most of the rest out and tweaked the image to enhance the sun beams.

Photography is all about light.  One of my favorite weather situations is when there are large, black clouds in the background and the subject in the foreground is well lit by morning or afternoon/evening sun.  All too often I see a nice potential image and either the camera is not conveniently near by or I’m rushing down a highway and cannot take the time to stop.

This special morning I had to stop – even if it did make me late to work.  I also love the color version of the same image which is currently hanging on the wall of “210” in Visalia.

Stormy Oak in Color. Click on photo or link below for more oak photos.

You can see several more images of this setting in color and B&W in this gallery.  I am sad to say that the 200+ year old oak in the middle of these three large specimens fell over this summer and is now gone.  The re-plant in its place will be generations before it is as stately as the original.

I printed this on metallic paper and it really “pops”.  Thinking about having it or one of the others in the same gallery printed on Aluminum.  See more of this one fantastic sunset in various colors in this gallery: Valley Oaks at Sunset  Although the sunset was really great, the extremes in color shift in the gallery were mostly caused by adjusting the white balance of the photos through software.

My 2nd place image below left. Winning Image above right.

Old Milk Barn – End of an Era. Click on photo to see close up

I love old barns.  They are so photogenic and nostalgic at the same time.  I am sure many others feel the same and the reason why there is a competitive category just for them.  The rustic barns look great in photos. Weathered wood sides, rusted tin roofs. The trouble is, what makes them great for photos also means they are dying and disappearing.

I drive by this old milk barn everyday too and for the last 7 years or so have periodically stopped to take an image of it when the weather or crops in front make it even more interesting.  So have many others because there is almost always an image of it submitted to the Fair.  In fact the first place image in this category is of the same barn but looking at it from the north instead of from the west as I did.  I am sure many living in and around Visalia and Tulare have seen it as it is just to the east of Mooney Grove.

I have literally hundreds of images of this barn just like or very similar to the winning image.  In fact, when I turned in the Fair entry form I had intended to show the progressive “leaning” of this barn as it has slowly been collapsing over time and I have the images from the north to show it.  This “Progressive Decay” image has existed in my head  for years but still needed to be created.  I spent several hours trying to put one together after the entry form was submitted but nothing was working for the space and size parameters for the photo sizes allowed.  I also was trying to show the craggy old Oak tree next to the barn that also died and fell during the same period.  That was a sad day when I saw the Oak on the ground.  Some day, I hope to finish the image that is in my head.

Running out of time, I printed this lone image of the barn captured after a a passing storm created favorable light – black background and a lit foreground.  My “Progressive Decay” image may just have to wait until the next puff of wind finishes knocking over the barn – something I have expected during every passing thunderstorm.  And then I’ll weep over the loss of this old friend I have known since I moved to Visalia in 1966. 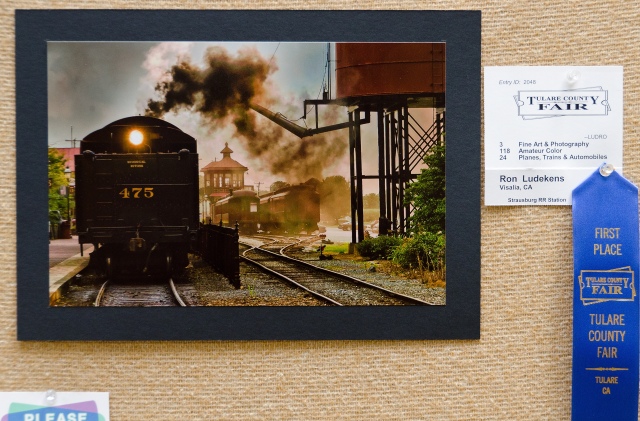 For a number of years I have traveled to the Philadelphia area for a trade show.  Since that area is so full of history, I get there a weekend early to take photos.  I have fallen in love with Lancaster and Bucks Counties – Amish life, covered bridges and lots more.  I keep being drawn back to Strasburg, PA where there is this outstanding museum of rolling railroad stock.  This is a whole lot better than my Lionel train set as a kid.

Every visit I have made to this location (this part is free to enter – the enclosed museum is not) I have come away with new favorite images.  I liked the contrasts and gritty feeling of this image.  Thankfully they don’t have a regional Air Quality Board to squash the running of these old trains.  See more images of Strasburg Railroad Museum here: Strasburg Gallery.

The idea behind the Photojournalism category is to capture a story in a single image.

Up on crowded Glacier Point above Yosemite Valley, Barbara and I ran across this artist painting Yosemite Falls in the distance.  I liked the idea of capturing the artist at work in his “studio”.  Climbed on some boulders to grab a couple of images while waiting for other visiting heads to move out of the frame.  I have another image I like better where the ranger is pointing to his canvas as if admiring a detail but the face of the ranger is clearly detailed and I thought leaving him more anonymous would be better.  Used single shot HDR to salvage the details of the darker valley below.  This HDR image is more “over-the-top” than I like and I will probably re-work the image again with the new NIK HDR software that I am really beginning to like.

The artist is James McGrew and his website is www.JamesMcGrewFineArt.com.  As a courtesy, I sent him copies of the images I took.

OK – we have reached the end of this long post.  Now off to work in the real world.

God created a marvelous world full of wonderful sights and people. He is the Creator and it is His Palette of beauty that Ron Ludekens tries to capture as photographic images. Images of nature or images of people and their lives - both reflect the handiwork of the Creator. Ron is a photographer living in Visalia, California - part of the great Central Valley. He is immediately surrounded by agriculture and all the hard working people that feed our world. A short distance away are the grand Sierra Nevada mountains, impressive National Parks and, wider still, the vast diversity that California has to offer. Ron is one of the family owners of the L.E. Cooke Co Wholesale Nursery - a leader in the horticulture industry of North America. Even on the job, his camera is always near by. His photos for the nursery trade have been published in print and around the websites of nurseries across America. Ron is also a leader in his church and its missions. Ron's photography has been a resource the church uses in its communications and message. Plus photos of all the fun things we do are shared among members and friends. Ron also loves capturing precious moments in lives of people. Weddings, senior portraits, graduations, family gatherings, maternity and special events. Ron will not shoot more than four weddings a year to provide the attention to detail and followup that is required for such an important milestone event in the lives of the couple. Ron can be reached at 559-732-7165 or cell 559-967-5370.
View all posts by Ron Ludekens →
This entry was posted in Birds, HDR - High Dynamic Range, Oregon, Photography - General Topics, Trains & Railroad, Tulare County, Wildlife. Bookmark the permalink.